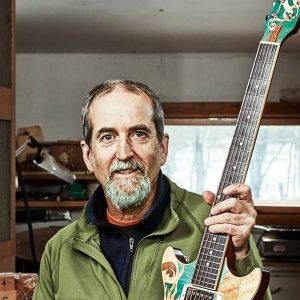 James Macdonald began woodworking professionally at the age of 22 in the early 1980’s. Initially working as a mold maker, guitar maker, cabinetmaker, and boatbuilder he moved to Maine and built his home, as one of the last original back-to-landers. After a few more years of boatbuilding on the coast, James opened his own custom woodworking business. He learned marquetry, the making of pictures out of wood veneers, from Silas Kopf in the early ’90’s and since 2000 has taught marquetry, oftentimes with Kopf, at the Center for Furniture Craftsmanship in Rockport Maine. Macdonald has also taught a marquetry course at the Haystck Mountain School of Crafts, and basic woodworking skills at the Carpenter’s Boat Shop. Presently he is focusing on making electric guitars that feature his marquetry art. His work can be seen on Facebook.